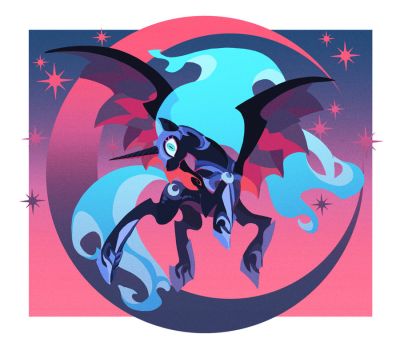 Night's Favored Child a MLP alternate universe fic in which Nightmare Moon won against Celestia long ago and rules Equestria, which hasn't seen the sun in thousands of years is by far one of the top MLP fanfics, if it doesn't rank among the top five it is definately in the top ten.

At 151,320 words it is also a story that takes you through Equestria in beautiful detail. For almost a thousand years, the immortal Nightmare Moon has reigned over Equestria as Empress. To the average pony, Nightmare Moon is an overarching enigma whose rule is absolute and whose wrath is terrible. But to Twilight Sparkle, who as an orphan has never known her parents, the Empress is something else entirely.

When the young unicorn is brought under the royal wing as an apprentice, she learns a great deal more about the supposed tyrant than she ever knew. But as Twilight is introduced to life with her new mentor, she is thrust into a world of political intrigue, conspiracies and secrets. Secrets that were never meant to be revealed.

As allies and enemies plot against the very peace of the nation, will Twilight fall prey to the perils of her new position? Or will she prosper and find in Nightmare Moon the mother she never had?