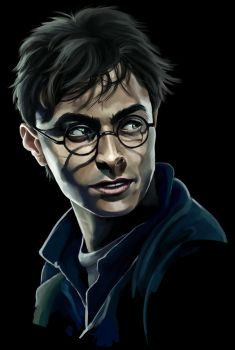 Seventh Horcrux is easily the funniest HP fic I've read. The summary: "The presence of a foreign soul may have unexpected side effects on a growing child. I am Lord Volde…Harry Potter. I'm Harry Potter. In which Harry is insane, Hermione is a Dark Lady-in-training, Ginny is a minion, and Ron is confused.

I am Lord Voldemort, and I was one step away from conquering Wizarding Britain.

October 31st, 1981 began as a fairly normal day – arranging raids, crucioing incompetents, lazing about on my throne – yet it seemed that everything my followers did irked me.

Bellatrix crouched at my feet, sneaking glances and occasionally emitting dreamy sighs – exactly the sort of behavior that caused me to turn myself into a nose-less snake. Rabastan Lestrange was playing a game called Curse the Recruits, the recruits were screaming, Nott was paging through one of my Dark tomes, and Lucius had disappeared to go brush his hair or something. There were worse ways to spend Halloween, I supposed.

"M-my Lord!" a nasally voice cried, its owner scurrying towards my throne. "I have information on the Potters."

I paused for a moment, contemplating the Death Eater's words. The Potters were Dumbledore's minions, the ones with the prophesied child. They'd defied me three times. I should know; I keep a list of these things.

"Speak quickly, then," I snapped, "I don't like to be kept waiting."

The short Death Eater cowered at my feet, and I noted that he was particularly talented at cowering.
"I'm s-s-sorry, my lord. I've gained their trust, as you ordered me to, and I can tell you that…" – he took a shuddering breath – "the Potters may be found at Godric's Hallow."

He rattled off the proper address, stumbling over every other word. The man was clearly incompetent, but he had been useful.

I said, "I am immensely pleased with this information…"

What was his name again? I narrowed my eyes at the still shivering man's unremarkable, brown hair. That was the trouble with giving all your followers masks. They all looked so similar. After a moment of silence, I murmured, "My faithful servant."

"Thank you, my l-lord," he simpered, bowing again and again. By the fifth time, I'd become peeved and, with an idle flick of my wand, slammed him into the stones.

The bleeding man stumbled from the room.

Seizing the opportunity to escape my followers, I gracefully rose to my feet.

"I shall be busy for some time. Do not kill any of your fellow Death Eaters without my permission" – I sternly eyed Bellatrix – "We hardly need a repetition of last Valentine's Day."

After a moment, she perked up. This was almost certainly a bad thing. "May I help you dispose of the blood traitors, my lord?"

Her dark eyes widened and she batted them at me. Disgusting. Bellatrix looked almost like a little child begging for a puppy. Observing the manic grin twitching to life on her face, I resolved to never again use Bellatrix and the word puppy together in the same sentence

Clearing my throat, I clarified, "This is a simple mission for I, the Dark Lord Voldemort. Your addition would be unnecessary."

I turned away from my pouting follower. Bellatrix was a wonderful asset: loyal, powerful, and bloodthirsty. Yet her eagerness could be grating. I walked quickly down the gloomy hallway, swept through the heavy door, and – my ears popping as I exited the wards – apparated mid-stride.

I appeared in the middle of a quiet street in the village known as Godric's Hollow. I had been here once or twice before to observe Dumbledore's residence. Know thy enemy and all that.

It was still fairly early in the night and a few trick-or-treaters wandered between houses. They stole glances at me and my, to quote them, bloody brilliant costume.

None of them so much as glanced at one particular cottage, though smoke drifted from its chimney. Considering children and their gluttonous fixation on candy, I could only presume I'd found the correct address.

I didn't bother with the subtle approach. In a moment, the door was blasted off its hinges and the screaming had started. Again, I'd like to stress that this had, so far, been a perfectly normal day.

The father was quickly dispatched, and I merrily climbed the staircase, following the hysterical sobs of mother and child. I'd never considered myself a violent man, but there is a certain satisfaction in winning, even if my opponents are severely outmatched. So what if I liked to draw it out a bit?

The Potter woman flung her arms out in a pitiful shield. She looked feral, eyes wide, limbs shaking. "Not Harry! Please, no, not Harry. I'll do anything!" she cried.

I offered her a chance to live because, contrary to popular belief, I can be nice. I'm also quite the conversationalist when my companion isn't trying to lick my boots. Seriously, who does that? But I digress.

The Potter woman had finally used up my patience, and I killed her with an Avada Kedavra. I laughed, the sound nearly drowning out the baby's sobs. So this was the child of prophecy, was it? Pathetic.

"Avada Kedavra," I said. The baby watched the spell curiously. He screamed, I cackled, and the room turned green.

Suddenly, I experienced a sensation that felt suspiciously like dying horribly and lost consciousness. My memory of the next few years is rather confused.

That day – October 31st, 1981 – marked the end of my reign and of the First Wizarding War. It also began my second life. This time, I was going to do things a bit differently.