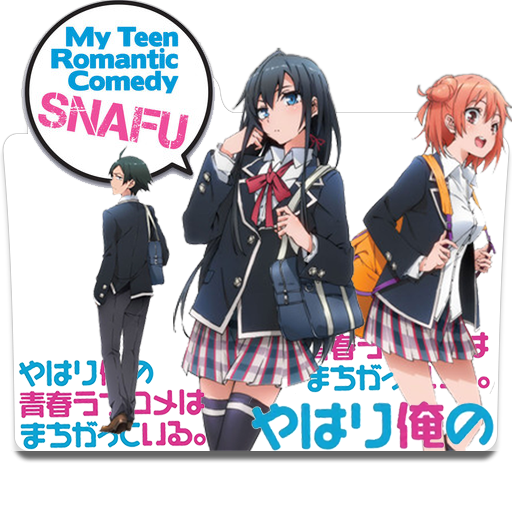 The End of the Affair. Future fic. Hachiman never did forsake his philosophy. He and Yukino part ways to pursue the lives of loners. Years later, they meet again, but there is no possibility of an innocent high school romance now. This is a really well-written fic but it's seriously depressing.

This story is not a romantic comedy.

I cannot stress this enough. First of all, it's not funny; Secondly, it's not romantic. Yukinoshita would agree with me on that. She, too, is not a fan of the romantic comedy god. My High School Reunion Was Wrong As I Expected

It was around six months before my high school graduation when Yuigahama Yui told me that she wanted to be my girlfriend. I said, "No," and it was there my 'Moteki' period ended, relatively speaking. No girl has ever fallen in love with me before or since. I experienced the fate that I have always felt is inevitable of a protagonist from a harem anime. He picks no one, the heroines come to their collective senses, and the protagonist is forever alone.

I hated love. I hated it because I hated youth, and love is the epitome of all a youth's hopes and dreams. People seem to think that if you hate love it's because you are lonely and you wish you had it, but it's more than that. Hating love is what makes a teenager feel morally superior.

In Yuigahama's case, I did not even think she loved me anyway. If pure, unending love existed, I had no inkling of it. All I saw of young love was people scratching each other's backs, drawn to each other only because of their selfish desire to have their existence be affirmed by another person.

So I said no, because I did not want to be fooling myself either, and Yuigahama cried as if her heart was broken.

I'll admit it: afterwards, I regretted it. I regretted it because Yuigahama and I stopped talking as much as we used to and even Yukinoshita was colder to me than usual. The end of high school came and went anticlimactically, no sentimental tears except from the girls, and so it felt wrong as expected. Even I, in all my cynical, pessimistic ways, thought my graduation would be like a finale of some sort, but it was just another day. The sun rose in the east and set in the west and instead of being there as all my classmates hugged each other, I stood outside and hugged myself. I thought of Yuigahama and what might have been. I had almost felt as if I had grasped at something, but in another instant, whatever half-formed thoughts I had were gone and I headed off for home without ever saying goodbye.

At the back gate, I was surprised to see a familiar face. She had been waiting expectantly for me, knowing full well what a coward I was.

"Nice to see you slinking off," she said, unfolding her arms and flicking her long, silky black hair behind her.

"Yukinoshita," I said, and then I lowered my head. What was there to say? No, I wasn't going to justify my actions now, not at this late stage of the game.

"So, even in the end, you never changed your way of thinking, did you?" It was just like Yukinoshita to cut through the pleasantries and get right to the truth. She wielded her words as if they were a katana. "No," she went on, half to herself, "you refused to let the world change you."

"The only person I can be is me," I said, and we both fell silent.

"Maybe so," she said, after a pause. But her eyes had clouded over with sadness, even as her expression remained unchanged. "Congratulations," she said.

"You won, didn't you? Whatever wager you had with yourself to never succumb to your youth."

Yukinoshita drew herself up a little. "You realise, Hikigaya-kun, for all intents and purposes, we are now adults of society?"

"I fear for the Japan of the near future."

She took my answer as a yes. "And so that means," she went on, "that you will never be the hero of a youth romantic comedy ever again."

"I never was one," I insisted grimly.

"The signs were there."

I stared mutely at Yukinoshita.

"Surely you felt it too," she said, and for once she sounded vague and almost dreamlike. "The same as I felt the day we first met. A loner boy meets a beautiful girl and their wacky adventures ensue." She smiled wistfully and the breath caught in my throat.

Behind the school building, as countless pink sakura petals fell gently from the trees around us, tinged with the warm glow of the late afternoon sunlight, Yukinoshita Yukino's beauty exceeded anything one could find in nature.

"But we didn't… we never…" I couldn't get the words out properly.

It was as if we were the only two people left in the world. I opened my mouth, about to say something, but I just couldn't bring myself to form the words. Whatever I thought of felt wrong. I looked down instead, frightened of my own heartbeat.

The moment had passed forever.

"It was nice meeting you, Hikigaya-kun," she said finally.

That was the last time we ever spoke for years.