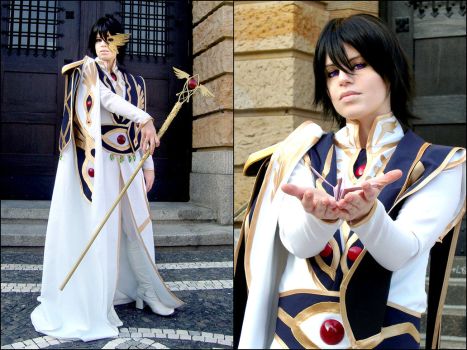 Updates are very slow, though, and I don't know if it will get finished.

Lelouch of Britannia is probably the most popular Code Geass fic, and for good reason. It's an AU where Lelouch wasn't exiled from Britannia and has some well-written battle scenes.

History often hinges on a moment. What if young Lelouch avoided the fate of exile and remained with the royal family? All roles become reversed. The tale of Lelouch's quest for power and vengeance as the Black Prince of the Empire. 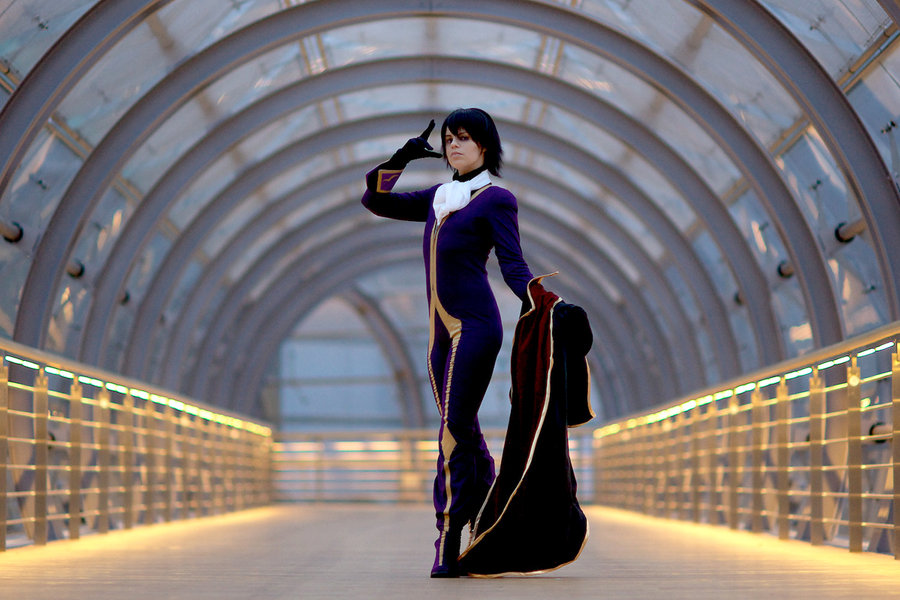 Prelude to the Storm

The boy stood frozen in the center of the Great Hall, the heart of the Empire, on which the sun never set and whose standard flew over more than a billion souls. To his left and right were the assembly of noble attendants at his father's court, whose pity, amusement, and derision he felt and heard through their sideways glances and their murmured whispers, passed politely behind lacquer fans and manicured hands, for it would not do to raise one's voice in the audience of his Majesty like the impudent child had just done. In his young mind, Lelouch understood perfectly what he was to these people; a spectacle, soon to become a cautionary tale to their own children and the subject of gossip over ladies' teas—the happy demise of the Lamperouges and their dastardly supporter the Ashfords, who received their just deserts for attempting to scale the ladder of power like monkeys, propelling that peasant harlot to court and His Majesty's attention.

Lelouch despised them, hated them, these worms who dressed like men, who lived by the weather of his father's mood and clung to the lint of his robes and kissed the ground his shadow fell over, but these pitiful creatures were not the subject of his attention, for seated before him on the throne of power was the man who embodied the Empire, whose voice issued commands that felled nations and whose glare melted the hearts of the stoutest men. The boy, but ten years of age, was just on the full receiving end of both, and the fear in him was so great it was all he could do to remain standing, shaking, for he was too frightened to flee.

Yet cold fear had one virtuous effect: the force of his father's rebuke had doused the childish passion which filled his thoughts when he entered the hall, regaining him the use of his greatest and only weapon—his mind. Now that he was able to think once more, his courage and indignation, extinguished by his father's force of presence, was quickly replaced by the strongest instinct known to man since his creation: survival.

Through the ordeal of his mother's death, his sister's injury, and his father's denunciation, Lelouch had gained the most important insight up till that point in his life—that the protected existence he led was an illusion. That the palace, with its crystal fountains and luscious gardens and smiling servants and atriums filled with butterflies and songbirds was no paradise, but a coliseum, where lions and men prowled and plotted to set upon and tear him to pieces, as they had recently done with the two people dearest to him in the world.

There was no help coming, no one left to protect them after the fall of the Ashfords. He was all that remained to look after Nunally and avenge their mother, a lone King without any pieces against a board full of foes, every route cut off, and all the audience waiting his final turn before the inevitable checkmate.

So he made the only move left to him.

Placing one hand behind his back and the other before him, the boy descended until his left knee was touching the floor. His hair, soft, black, and lustrous like her mother's, covered his visage as he bowed low, prostrating himself before the man who held his fate in his hand. "Forgive me, your Majesty, for that unsightly display. I was not myself. I apologize for the embarrassment I've caused you and for intruding upon your court. It shall never happen again."

A murmur arose from the gallery at the boy's reversal in attitude, interjected with a few sneers that soon fell quiet. Lelouch never looked up, keeping his eyes on the floor, the very image of a wayward son humbled into submission by his master and repenting his transgressions. When the hammer that was his father's command to expel, banish, or execute him did not come, he lifted his face and saw his father looking sideways, as though the shameful creature kneeling before him—his own flesh and blood—was not even worthy of his disdain. When the Emperor finally spoke, the cold, quiet words echoed through the Great Hall and into the chest of all who heard them.

"Be gone from my sight."

He rose slowly, gracefully, the nobles remarked amongst themselves later that evening in their post dinner gatherings, for a tyke who had just begged like a dog and been spared a fate of life on the streets. Retreating backwards, Lelouch maintained his posture of submission towards his Emperor until he reached the gate to the Great Hall, whereupon he turned and made his exit, the massive double doors closing behind him loudly, shutting away the piercing eyes of the lion and his laughing pack of hyenas.

The sky, which had been a clear expanse of blue and white when he arrived, had transformed during the his trial into a deep overcast. The sound of rolling thunder was audible in the distance as wet spots appearing on the plaza foreshadowed imminent storm. A palace footman came up behind the unescorted prince with a black umbrella, but Lelouch declined the servant's gesture. He began the long walk back to the place he once called home, now but a cage devoid of life and laughter, familiarity and warmth.

As he walked, the drizzle grew into a torrent that beat down upon him until rivulets ran down his face and his garbs clung to his skin. A philosophical bystander might have remarked that Heaven itself was mocking the young prince, reminding him cruelly with every freezing lash of rain his helplessness, his loneliness, his powerlessness to do anything for anyone, including himself. But had they looked closer, looked beneath the dripping wisps of hair that obscured the young boy's face, they would have seen that Lelouch was smiling, for Lelouch had many reasons to be pleased: His enemies, who witnessed his act of subservience today, would dismiss him as finished. They would count him as dead and forget about him, satisfied that the Lamperouges and her allies have been dismembered and buried, never to rise again. But they did not realize that Lelouch had avoided checkmate and remained to fight another day, right in the midst of his unsuspecting foes.

As he crossed through the Temple Plaza, the boom of a close by thunderclap reverberated through his chest and caused his eyes to look towards the Heavens. Blue and purple lightning streaked across the sky, illuminating the somber statues of Gods and Goddesses perched atop massive Roman columns. The young prince was enchanted—he watched as a bolt of lightning reached down and struck and Lady Justice's raised sword, showering the plaza with brilliant sparks, burnishing the image into the back of his mind.

Lelouch experienced a violent thrill. It was a sign; his purpose in life had found him. He would destroy those who murdered his mother, who crippled and blinded his sister, who ruined his idyllic world of peace. It may take a lifetime, but he would learn the identities of all those responsible and he would make them pay.

On that day, Lelouch Vi Brittania's childhood came to an end.