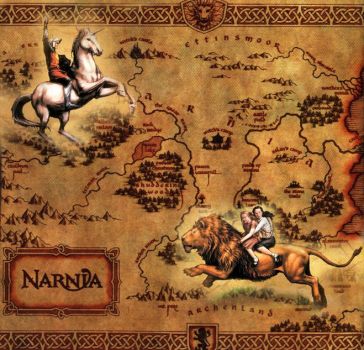 LVDB is my all-time favorite, a Narnia fanfic that presents a more realistic view of Narnia based on medieval history and politics and focuses on the ghost of the White Witch, Jadis, haunting Edmund.

It even manages to make you like Jadis while not undermining her status as a genocidal villain. Once upon a time, four siblings ruled the magical kingdom of Narnia.

That's what the old stories say, and they're true—as far as they go. Allow me to expand picture a bit.

Once upon a time, Aslan gave absolute power to four unprepared, terrified children. Their new kingdom was named Narnia: they conquered it by killing the previous queen, Jadis. Narnia was a magical kingdom; centaurs trooped through its forests and nymphs danced in its glades at twilight. Narnia was a medieval kingdom; its scarce human population huddled together in enclaves on its periphery. Jadis's winter had driven them to the borders of the Southern March and the islands of the East.

Life expectancy was low. Half of them died before their twentieth birthdays—from famine, disease, and childbirth. The survivors lived a reasonably happy existence in villages that rarely contained more than three hundred souls. They told stories and riddles, feasted at Christmas, danced around the maypole on Beltane, and fasted during the hungry gap in early spring. The adventurous ones traveled in pilgrimages to the Stone Table or the Lantern Waste, where the first king and queen had been crowned. At the end of their journeys, most settled down in the same villages where they were born, married their childhood sweethearts, and were buried in the same graveyards that held their great-great-ancestors unto the fiftieth generation. Over time, this habit had given each village's population a certain look, as the same families' children married each other again and again. In her fiefdom near Archenland, Susan could tell a man's place of origin by looking at him. I never acquired the knack.

This was the Narnia I remember. This was the land I ruled with my brother and sisters. And if it seems a bit different from the stories we told the man who Lucy always called "Dear Professor L.", well…my youngest sister probably put it best:

"We mustn't tell him, Ed. He'd think it was simply horrid."

I never agreed with her, by the way. At its worst, Narnia could be a nightmare. Yet something kept us there all those years. We grew up under Cair Paravel's arched marble ceilings. We chased each other between its tapestries, and called it home. As I write this from the safety of our air-conditioned house, Peter stares out the window. His hand moves in abbreviated staccato sweeps, reliving some battle or other in the wild lands of the North. Lucy still wakes up sometimes and peers eagerly at the night sky in search of Narnia's second moon. She hasn't found it yet.

She will soon enough. Years ago—I can't tell you how many, since 'years' is a relative term when you've spent your life in two worlds—I saw Narnia's doomsday. The Calormenes will sweep into our kingdom from the south. As Tash's armies spread across Narnia, the Lion whisk us away to play our part in the final drama. Our earthly bodies will die in a train wreck. Our souls will remain in Narnia.

I know all of this because Jadis showed me. That is the subject of my story–or at any rate, one of its subjects. Narnia was always complicated.