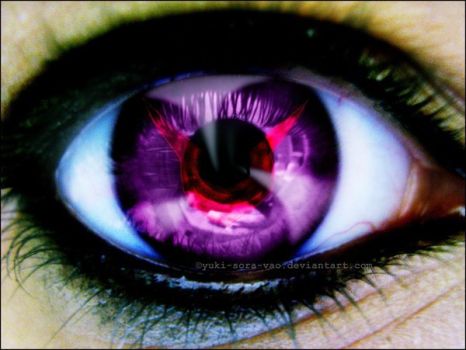 Galton's Children is a Code Geass/Elfen Lied crossover. It's also written by LVDB and has really good dialogue.

Lelouch meets a girl from his past who possesses inhuman powers and a terrible secret. Worse, he doesn't remember her. "Where were you last night?"

So Nunnally had noticed after all. Damn.

"Oh, just hanging out. You know…" I waved my hand airily and used the newly-lit pedestrian walk signal as an excuse to trail off.

Normally, I would have preferred to stand still. I'm not overly fond of Tokyo in the summertime. The hot, thick air forces itself into nostrils and causes jackets to constrict around their owners' shoulders. As a bonus, it carries the acrid smell of gasoline fumes. My leather loafers weren't ideal for hiking the thirty block distance to the pet store, either. Unlike my little sister, I don't spend an hour every day jogging. And she just had to pick this afternoon to buy a housecat.

I said as much to Nunnally, and received a cheerful rebuke in return. Walking was good for me. After all, I couldn't rely on my good metabolism forever.

"Besides," she added with a conspiratorial wink, "the Ashford girls prefer athletic boys."

Not when their armpits are soaked with sweat, I thought.

I rubbed my sunburned face and retorted that there was a difference between getting exercise and getting cooked. Nunnally ignored me and focused instead on a homeless woman in a tight pink shirt huddled under an umbrella. Now that the Royal Eugenics Department was getting to work in Japan in earnest, the twenty block radius under my sister's protection may have been the only safe place left for people like her.

"Maybe you should ask that lady for her umbrella, Your Pastiness," she said.

I gave her a sharp look, and she recoiled in feigned horror before bursting into a fit of giggles. I didn't mind—my griping had served its purpose. For now, the subject of last night had been safely sidestepped.

She pointed out a group of palm trees in the courtyard up ahead. Shade at last. We spent the next couple minutes walking through a sea of noisy Elevens and honking horns, only to find that the palms offered little protection. I cast a longing glance at the air-conditioned silver-and-gray interior of a pizza parlor and suggested a short lunch break.

My slavedriver/personal trainer/little sister wouldn't hear of it. We spent the next twenty minutes walking through a neverending treadmill of hot white cement, with Nunnally chirping encouragement the whole time. I tried to con one of our bodyguards into carrying me, but Nunners' disapproving glance vetoed that idea.

She had a point. If I hadn't been suffering from the heat, I might even have complimented her on the cleverness of using my least favorite family member to goad me into exercise.

"You still haven't told me where you were last night," she said

As usual, her timing was impeccable. She'd waited until the victim was addled with sunstroke.

Nothing much, Nunnally, I thought. Just commanding terrorists and threatening Brother Clovis at gunpoint. Oh, and getting supernatural powers from a green-haired woman while we ran from a naked teenager with telekinetic abilities. You know, the usual.

"I was just hanging out late, Nunnally."

Her eyes narrowed. Nunnally has an uncanny knack for spotting lies—a fact I've learned from hard experience. The curse of the vi Britannia family. Usually, it's easier to distract her than to bluff her, so I did.

"I'm sorry I didn't get back in time, OK? Besides, it isn't as if you're an invalid or anything. I know you can take care of yourself."

"You're trying to appeal to my vanity, Brother, and it won't work."

"Am I that transparent?"

Observant though she was, I had an advantage: My guilty tells could come from any number of things. I hinted at one.

"I was just playing chess, Nunnally."

She gave an exasperated sigh and I realized that I'd dodged the bullet. It suddenly occurred to me that concealing my activities on a 24/7 basis was going to be difficult. Case in point:

"You're hiding something else from me, aren't you Lelouch?"

A flurry of images: My brother's panicked face when he thought he was about to die. Britannian soldiers being torn limb from limb by invisible arms. A female terrorist piloting an old Glasgow.

I shrugged. Nunnally let it pass for the time being. We continued walking.

"Clovis wants to meet you this afternoon."

Fortunately, Nunnally was looking the other way when I gave a guilty start—or at least what passes for a guilty start among the Britannian royal family. Most people probably wouldn't have noticed, but Nunnally is not 'most people'. I took a slow breath to make sure my voice was level.

"What does he want?"

"He wants your help in the anti-terrorist campaign, silly." Despite the lighthearted words, she sounded uncomfortable. You'd think that spending years in the Britannian court would have inured her to violence. Not so.

"Didn't you hear what happened yesterday?" she said.

Just don't put two and two together, sister. That would be…inconvenient.

"Yes, I did. Brother Clovis must have soiled himself. Did they catch the man who did it?"

She gave me a reproving look after my crack about Clovis. Then she told me that the man who'd forced Clovis to call off the attack hadn't been identified. He'd been wearing a helmet, and his voice was disguised with an obviously fake Britannian accent.

We walked and baked for a couple more minutes.