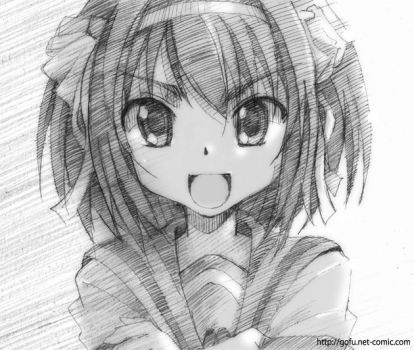 Meet the Suzuimiyas is an obvious choice.

Kyon's family is moving away, much to the crushing disappointment of the entire SOS Brigade. It seems unavoidable, but a last-minute change in plans provides him one opportunity to stay: Living with Haruhi and her family.

Kyon soon learns that the apple doesn't fall too far from the tree. The very unique and nuanced style of the original novels are captured nigh-perfectly in this story, and everyone's characterized very well. Haruhi's parents are two of the best Original Characters I've seen in fanfiction. Fans of the novels or the anime simply need to read this story.

In order to avoid having to move away, Kyon is given the option of moving in with Haruhi. Knowing that this would mean meeting her parents, Kyon soon finds out that the apple doesn't fall far from the tree. It was yet another typical day in the clubroom. I was currently strategizing my next move in a game of chess against Koizumi. We were about halfway through the match and it was clear that I was beginning to gain the upper-hand when I had taken out his queen in the previous move. Seriously, it was such a bone-headed move that I half-believed he did it on purpose. Why does he like these games so much if he sucks at them?

Asahina-san was busy working on homework from what appeared to be math class. Although she usually gives the appearance of someone of unexceptional intellect, watching her complete the problems she was doing seemed to indicate that she was a lot smarter than she let on. I only wish I could do as well at math as she does.

Nagato-san was sitting in her usual corner, reading what appeared to be an old, Spanish version of Don Quixote. I began to contemplate as to whether there were any languages that Nagato didn't know. Maybe there were some African or South American tribal languages that she didn't know. There was no doubt that she was familiar with all the popular languages.

Finally, my eyes moved towards the front of the room, where our very own brigade commander appeared to be watching something intently on the computer. I assumed it was some kind of video, perhaps a clip from one of those shows that explore haunted houses. However, I was soon corrected when Haruhi let out an exasperated groan.

"Aww man! I can't believe he failed! I thought for sure he'd win the money!"

Puzzled by her comment, I decided to open my mouth. "What are you watching a game show?"

Haruhi raised her eyebrow in my direction, an obvious indicator that I was wrong once again. "Of course not! I was watching a show about this supposed psychic that was trying to win that million dollar prize that was being given out by the James Randi Foundation."

Ah, now it makes sense. The James Randi Foundation is an organization founded by the world famous skeptic and former magician James Randi. He goes around the world trying to find rational explanations for seemingly phenomenal events. I was a bit of a fan of his until a year ago when I met Haruhi.

Anyway, his foundation has this prize that they're holding onto that is worth one million US dollars to anyone that can prove under strict laboratory conditions a paranormal phenomenon. This prize has been up for grabs for years, yet not one person has come to claim the prize. This fact has been a bit of a thorn in Haruhi's side, considering the fact that she adamantly wants to find the paranormal.

"It pisses me off!" stated Haruhi. "If there really are people with paranormal abilities in this world, why hasn't anyone claimed the prize yet?"

"Oh come on, Kyon! Do you really think that those are the reasons? I think that maybe they're covering up the truth!"

I highly doubt that they are. I still stand by my reasons. I know better now that the first choice was not the case. I already know that aliens, time travelers and espers are in fact real. The second choice seems somewhat unlikely as well as this is a fairly well known prize and somebody with actually powers would be able to prove themselves eventually. The third choice, given what I know, seemed the most logical. Aliens, such as Nagato, would hardly be concerned with proving themselves to the world especially if they're supposed to keep themselves a secret so they can keep an eye out on Haruhi. The same could be said about the espers, although their powers would be difficult to prove under laboratory conditions anyway. As for time travelers, proving their existence would likely cause a time paradox, and their powers are the product of radically advanced science and thus don't really count as paranormal anyway.

Haruhi the stood up from her chair, a look of defiance pasted on her expression. "I hereby declare that the James Randi Foundation is the sworn enemy of the SOS Brigade! I declare war on them! WAR!"

I highly doubt the JREF is concerned about the actions of a Japanese high school pseudo-club. Isn't James Randi himself in his eighties. I'm sure he's more concerned about staying alive then anything else.

It was then that Koizumi stated "check" while I was being distracted by Haruhi's nonsense. Dammit, you're not supposed to beat me!