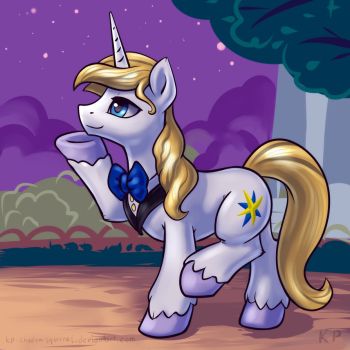 Blueblood: Hero of Equestria a MLP fic written in a world where Prince Blueblood is forced into being an officer in a war with the Changelings. Blueblood is both selfish and cowardly and doesn't really want to fight. This fics has really engaging narration and does a good job of making Blueblood likable.

In the aftermath of the Changeling incursion of Canterlot during the marriage of Shining Armour and Princess Mi Amore Cadenza, Equestria gears itself for war against the Changeling menace.

Against a foe that can take the shape of any pony, assume their life, and undermine Equestria from within, the Royal Pony Sisters create a new institution to monitor their Royal Guard for any Changeling corruption, cowardice, and incompetence: the Commissariat.

As total war rages across the land one hero stands out above the rest; Commissar Blueblood, hero of Equestria. Or at least that's what the propaganda says. The truth, as ever, is far more complex, as the esteemed Blueblood is merely looking for an easy and sedate life.

Unfortunately, fate has a habit of throwing him into increasingly dangerous and suicidal missions, which he must survive with a combination of self-preservation, lying, and sheer blind luck, even if doing so only fuels his soaring reputation!

This is an MLP/Ciaphas Cain (Warhammer 40,000) crossover, sort of… Rather than a straight mash up between two very different universes, which would have produced some clumsy unattractive narrative the author, instead transcribed the writing style, character personalities, and a handful elements from the Ciaphas Cain novels into MLP, which works really well. Obviously transplanting Ciaphas Cain's personality into Blueblood (don't worry hopefully it'll make sense) and the existence of the Commissariat.

This story is still squarely anchored in MLP, so no power-armoured ponies and no oppressive grim darkness. I suppose this story might have some dark elements in it, since we are talking about total war, but certainly not to the level that 40k is infamous for. Which is why I consider this a solid MLP fanfic.

At any rate, this means you won't need an encyclopaedic knowledge of the 40k universe to follow the story, or even any knowledge of 40k at all. But you should be aware of where the source material is coming from.