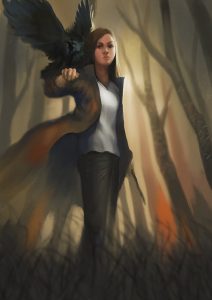 The Alexandra Quick series takes place after the events of Harry Potter, but in Magical America.

The cast is all OCs, but the story is great and makes good use of its setting with plenty of references to American history.

Alexandra Quick is the main character in a series of fan fictions written by Inverarity (currently on the fifth book out of seven) that is set in the Harry Potter universe, but is almost completely unrelated otherwise.

Quick is a young witch who, much like Potter, was raised as a Muggle in the United States, and much like Harry, she is whisked away to Charmbridge Academy at age eleven to learn how to control her magical talents.

Unlike Harry, she has a fascination with Dark Magic and is generally ostracized by her peers for it. Worse yet, someone appears to be trying to kill her…

The series is notable for being Darker and Edgier while still managing to capture the same feeling as Harry Potter, as well as exploring magic beyond that the students are taught in schools. With one of the most realistic and coherent portrayals of Magical America, Alexandra Quick is a lot more than fanfic, it's closer to the Star Wars novels set in earlier eras with less Lucas guidance.

Titles in the series are Alexandra Quick and the Thorn Circle, the Lands Below, the Deathly Regiment and the Stars Above.